In early March we arrived in Paris for Fashion Week. We showed the Collection at the Hotel Sofitel Le Faubourg which is a beautiful low key luxury hotel in a fantastic location in the centre of Paris.

During our stay we received an invitation to go to the Cara & Co Synergy of Art and Fashion Exhibition at Le Meurice Hotel. We had previously been asked to contribute two pieces of work for this exhibition – a garment and a wall-art object. 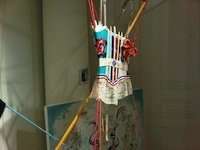 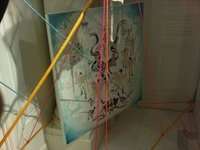 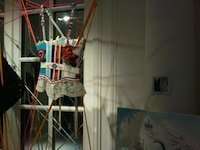 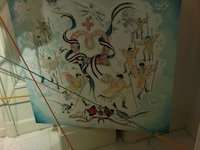 The synergy of art and fashion is one of the core fundamental values of the Russian concept store Cara & Co. Designers working with Cara & Co move away from the conveyor belts of mass production in order to mould a fashion garment into an actual work of art. Ultimately the distinction between art and fashion becomes virtually non-existent.

The project “Cara & Co Synergy of Art and Fashion” is aimed to convey the authenticity and eternal values of fashion, its depth, its artistry.

It was a lovely champagne reception with Rosa Alpert and Alexi Oleshov the founders of Cara & Co informing all the guests that the exhibition will carry on to cities such as Seoul, Beijing and Sydney and after the tour the pieces will be sold at auction and the proceeds will be donated to Cara & Co’s charity organization, The Sound World, which helps deaf children from all over the world benefit from cochlear implants.

Subscribe to receive news and updates about Queene and Belle, our shop and new collections.